Q: Can STAR Voting elect winners who are not majority preferred?

No voting method can guarantee that winners will always have a majority of all votes cast.

This is because elections may exist where there are three or more polarized factions who refuse to coalition. The recent Portland, Oregon mayoral election is a perfect example where even in a top-two majority runoff election Ted Wheeler was unable to get a majority because the write-in campaign for Rayford received many votes.

When voters are able to support multiple options, like in STAR Voting, it's common for there to be multiple candidates who had the support of a majority of voters. For example pizza and burritos could both be majority supported dinner options in a family. In these cases, STAR voting not only ensures that the winner is majority preferred, but also that the strongest majority supported candidate wins. 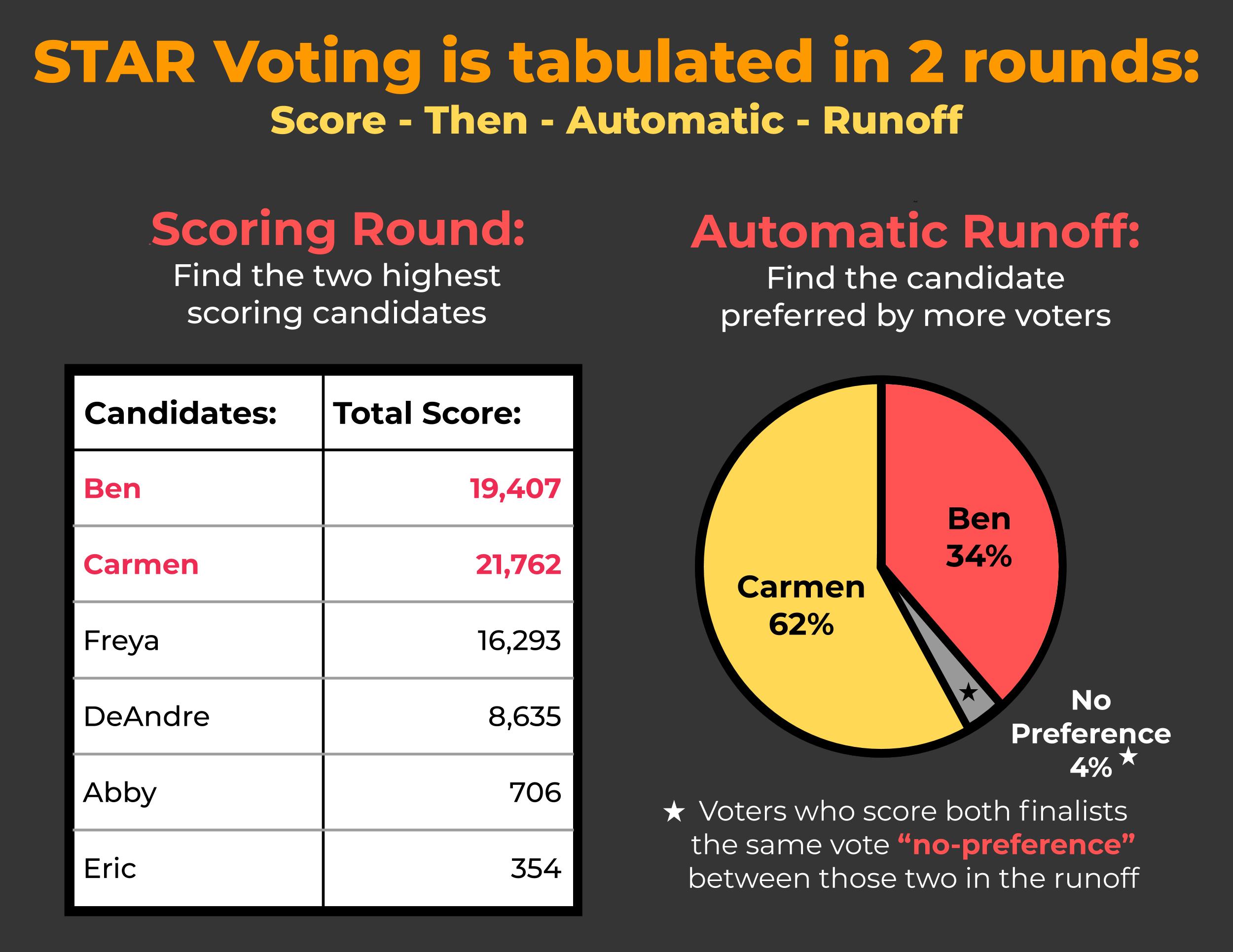 Ranked Choice Voting (RCV) advocates claim that RCV elects majority winners, but in many cases this is a false majority which is manufactured by discarding ballots and then counting remaining ballots only. Ballots in RCV can removed from the tabulation process by several methods:

1. If a voter doesn't rank all the candidates, their vote may be unable to transfer when their favorite or favorites are eliminated. Most jurisdictions limit rankings to the top 4, 5, or 10 because doing so helps reduce voter error and voided ballots, and also because of ballot formatting, printing, and tabulation constraints. Unfortunately, this leads to an increase in exhausted ballots if the finalists don't end up in a voters list of ranked candidates.

2. If a voter's first choice or top choices are quite strong, but not strong enough to ultimately win with the RCV tabulation, then a vote may not transfer until that voter's next choice(s) has already been eliminated. Voters whose favorite comes in second place will always have their first choice eliminated but their next choice not counted. This directly contradicts claims to the contrary that can be found in most voter education materials.

3. Voters may strategically not rank additional candidates due to incorrect assumptions about the way RCV is tallied.

These ballots are called exhausted ballots. On average, 10.9% of RCV ballots are not counted in the deciding round and 61% of RCV elections do not find a true majority.

4. If a ballot is voided due to voter error their vote may be unable to be counted or unable to transfer. These are called "spoiled ballots" Spoiled ballots are sometimes included in statistics for ballot exhaustion and sometimes are not. Spoiled ballots include ballots which gave candidates equal rankings, gave multiple rankings to a candidate, and in some cases, voters who skipped rankings.

Ranked Choice Voting (RCV) often fails to elect the strongest majority preferred candidate or the candidate preferred over all others because many of the rankings voters give are never counted, due to tabulation of RCV acting as a series of Choose-One elections, where only one ranking a voter's ballot is considered. These wasted rankings can skew election results in competitive races where multiple candidates are viable.

Unlike RCV, STAR Voting uses all ballot data and voter preferences during tabulation. No ballots are exhausted. STAR Voting advances the two highest scoring candidates to the runoff and then elects the finalist who was preferred by more voters. This is a majority of all voters who had a preference between these two.

The Burlington, Vermont 2009 Mayoral Election, which used Ranked Choice Voting, is a classic example where there were two majority preferred candidates. RCV failed to elect the candidate with the larger majority, and the candidate preferred over all others lost. This election is also a classic example showing massive strategic voting incentives for RCV voters. In this election Kurt Wright voters had been told that if their favorites were eliminated their next choice would be counted and so they voted for their favorite honestly even though it was clear from polling that Wright would not be able to win in the left-leaning town. Honestly ranking their favorite 1st backfired and actually helped elect these voter's last choice, whereas if they had not voted, or had voted lesser-evil, their 2nd choice would have won. It's also worth noting that Wright voters did not have their 2nd choice counted because the election was called (prematurely) for Bob Kiss. 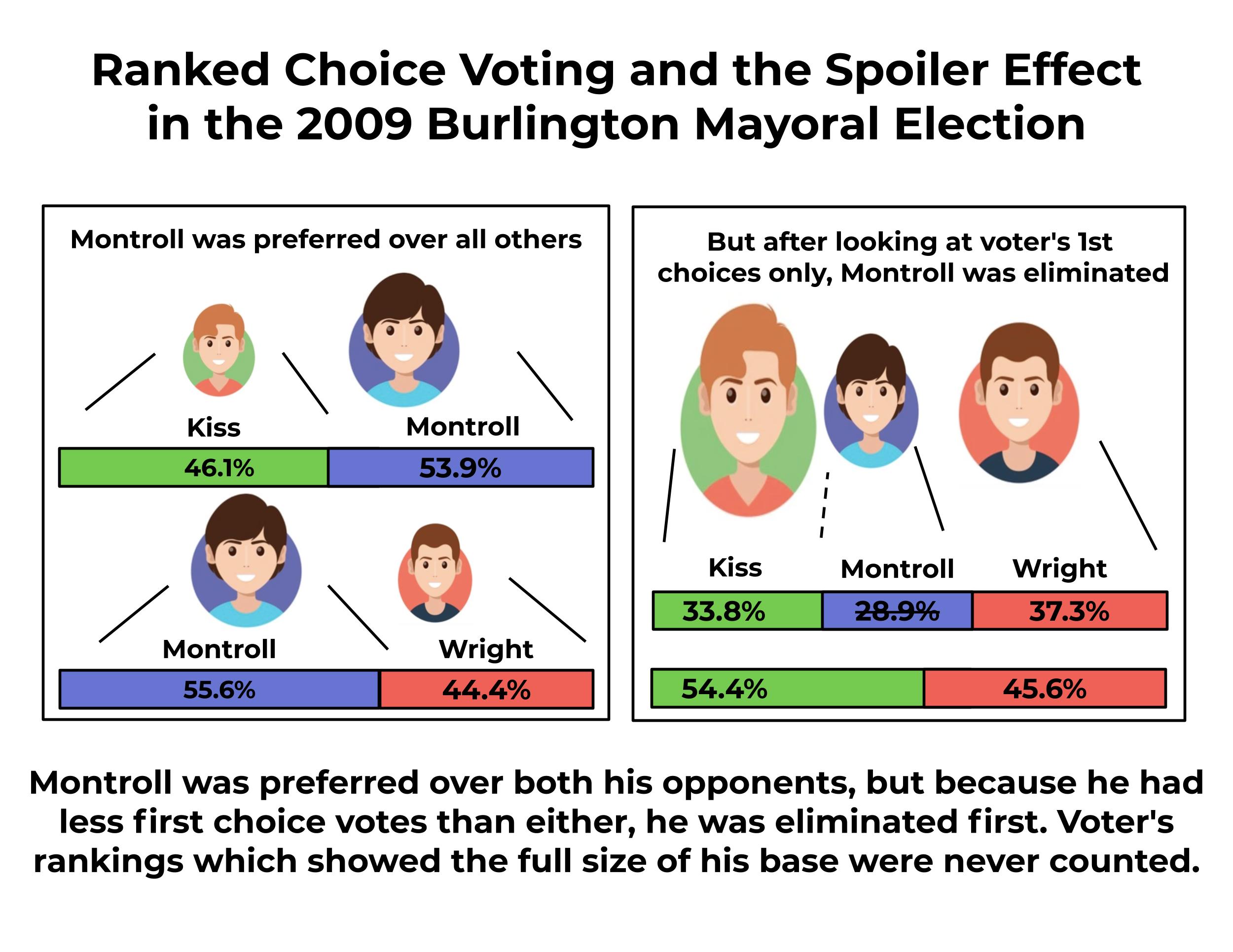 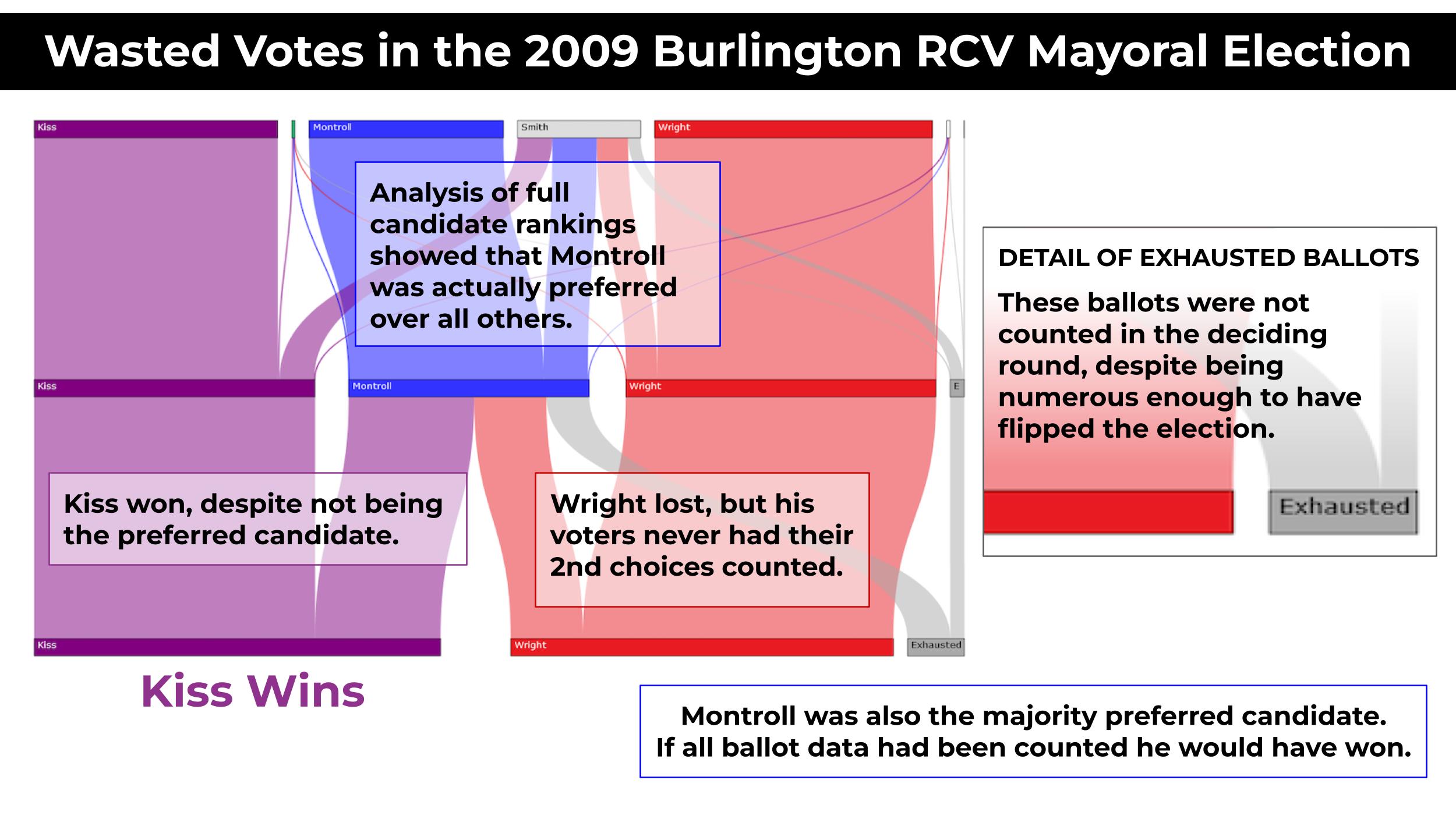 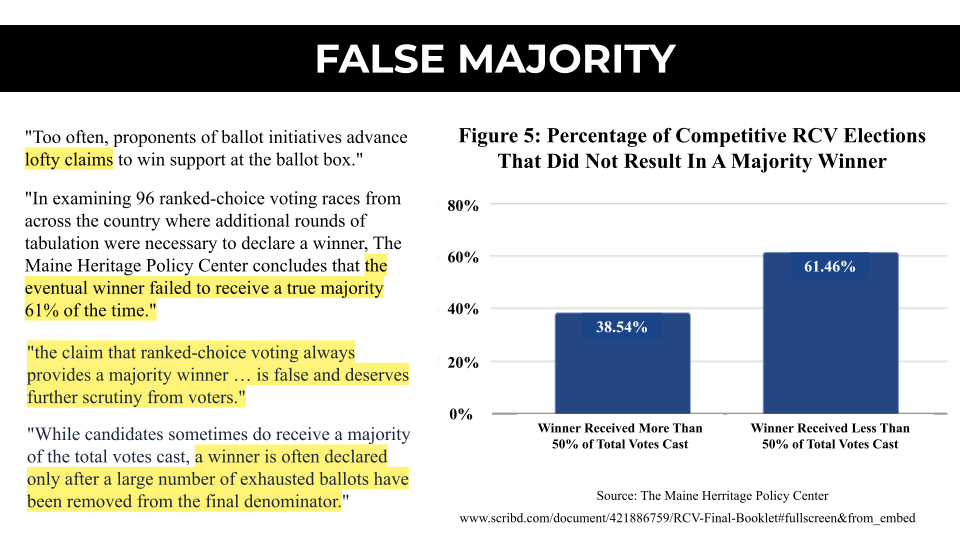