Bullet voting can be honest voting:

The fact is, some voters only like one candidate. For these people a 'bullet vote' is an honest vote. The key is to ensure that voters who do have a more nuanced opinion are empowered and encouraged to vote more expressively, and STAR Voting does this.

In some elections there may be one faction that runs only one candidate while other faction(s) run multiple candidates. These lopsided elections are the most vulnerable to vote-splitting and spoilers and STAR Voting does a great job of preventing spoiled elections even under these kinds of stress tests by allowing voters to support all the candidates they prefer.

The Independent Party of Oregon 2020 primary election, which used STAR for the first time, was one such example. Close to 1/2 the voters leaned Republican (based on their 1st choice votes) and in all three races there was only one Republican candidate, whereas there were multiple left candidates in all three races. As expected, many Republican voters gave 5 to the Republican and 0s to the others. On the left, which ran more candidates, most voters were much more expressive, showing which Democrat or Progressive they preferred and who else they supported. In all three of these elections the STAR winner was both the Condorcet winner (preferred over all others) and the highest scoring candidate, so there is no doubt that even in these types of difficult scenarios, STAR Voting was able to elect the correct winners and avoid spoiled elections.

How does STAR Voting compare to Ranked Choice Voting in regard to bullet voting?

Both STAR Voting and Ranked Choice Voting (RCV) do a good job of encouraging voters to be expressive and in both systems bullet voting is not a viable or effective strategy. This is because both STAR and RCV are preference voting methods with an instant runoff. In this sense they have a lot in common.

In this FairVote* article they cite the fact that the average/median amount of bullet voting in RCV elections is 32%. As the FairVote article shows, bullet voting trends have much more to do with the distribution of candidates than with the voting method itself.

In RCV there have been many elections that have had higher rates of bullet voting than we saw in the Independent Party of Oregon primary, which is why it's important to have a larger, statistically relevant sample size and take context into consideration before we draw broader conclusions. 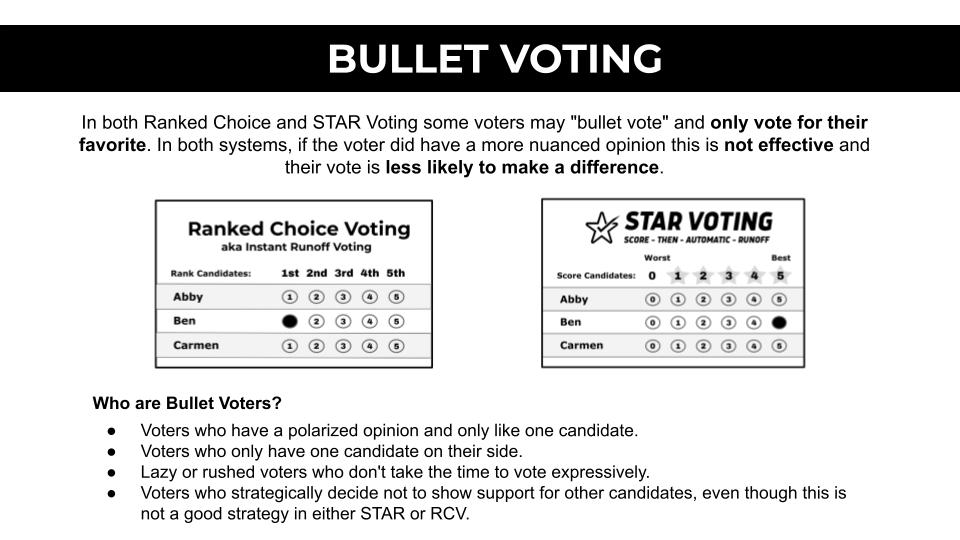 * Veteran readers of this site may be surprised to see us citing FairVote as a source. While they still have a long way to go before the electoral science community considers them to be credible, this article is a step in the right direction.