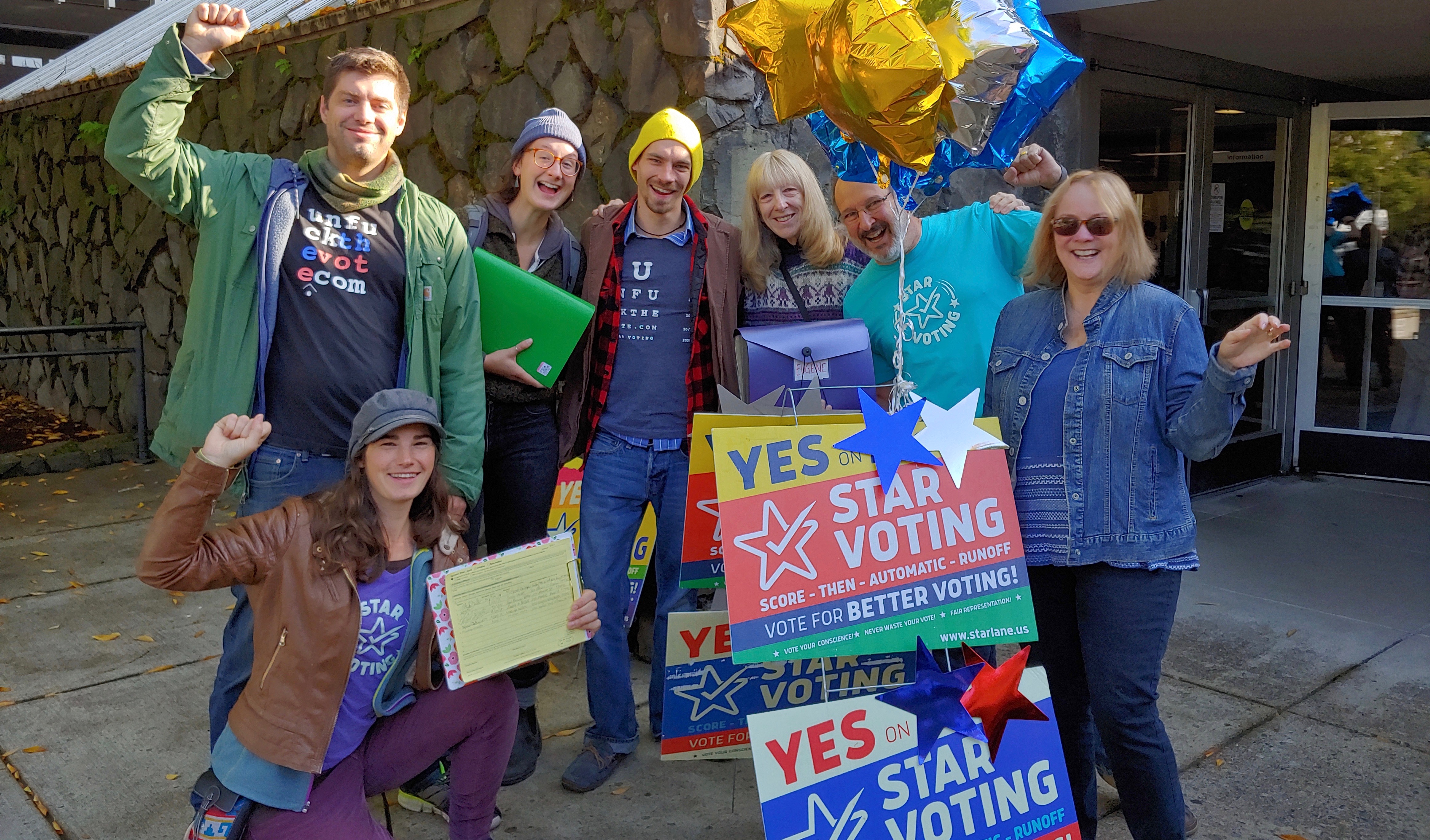 Eugene canvassers turn in the last batch of signatures for the STAR Voting for Eugene Campaign. The ballot initiative should have been on the 2020 ballot, but was denied for reasons which have since been ruled to be examples of illegal voter disenfranchisement by Oregon Courts, though no remedy has been offered to date.

A simple change that could have a huge impact:

A recent Oregon ruling has reignited the case for why the STAR voting for Eugene initiative should have been qualified to be on the ballot. On these grounds the Equal Vote Coalition has filed a new appeal to the Oregon Supreme Court and the next hearing is expected to occur in the spring of 2022.

Because these cases can drag on for years, we are reaching out to our elected representatives to call for this injustice to be remedied by them directly and as quickly as possible. We are asking Eugene City council and the Lane County Commissioners to take action, to request that Lane County Elections revisit the rejected "inactive" signers and recertify the petition, and if not, to place the initiative on the ballot themselves.

Below you will see an update from our lawyer, Dan Meek, on the rational:

"The County Clerk disqualified from the 20% sample of STAR Voting signatures a total of 51 inactive registered voters.  Considering them valid would increase the overall count by 255, more than enough--by itself--to make up the supposed shortfall of 111 signatures."

The practice of disqualifying or removing "inactive" registered voters from the polls or from initiatives is currently the focus of nationwide attention and this is one of the key examples of the type of voter disenfranchisement that disproportionately impacts marginalized communities and that was explicitly banned in the 1969 Voter Rights Act. Oregon should be better than this and it's not too late to set this right.

STAR Voting for Eugene, OR

The STAR Voting for Eugene campaign turned in 10,406 signatures to qualify for the May 2020 ballot, but despite turning in well over the required number, the verification process determined that the fate of the petition came down to 23 signers in the sample who were subjectively rejected on the basis of their signatures alone. The petition was deemed "void."

The campaign then turned in 32 notarized affidavits to the Mayor verifying that these people did sign.

Concurrently, the campaign went through the "signers report" with a fine toothed comb, and documented over 30 signers who were rejected in error for a variety of reasons. The campaign has filed a legal appeal calling for this evidence to be considered.

The case was heard in Lane County Circuit Court and was ruled "moot" in early December of 2020 on the grounds that the election we had aimed for had past. Opposing council did not dispute our proof that the signers were indeed valid. This ruling is incorrect. Statewide initiative law requires that statewide ballot initiatives must aim for a specific ballot, but this is NOT the case for local initiatives. Local initiatives are certified to the next ballot after they are approved, and our petition has not been approved yet, so the clock has not started ticking.

Shortly after, on 12/31/20, another ruling in an adjacent case found that it is illegal to reject signatures from "inactive voters." An inactive voter is a registered voter who has not voted in the last few elections and who the elections division no longer sends a ballot to. 51 of our signers were rejected on the grounds that they were "inactive" for a variety of reasons listed and 27 of those were coded as "inactive undeliverable ballots."

Join the STAR Voting Oregon chapter and start coming to meetings, or connect with us on slack to volunteer and collaborate with the team when you're available.

Monthly Meetings:
The STAR Voting Oregon Chapter meets monthly online. Please check on our events page for details and to get the meeting link.

Volunteer Opportunities: We have a number of subcommittees, projects, and volunteer opportunities. Regardless of your location, availability, or schedule you can help get this over the finish line! Our chapter is currently in need of people with the following skills and we're looking for the following items to help us complete work on our office. To volunteer email [email protected]

2007: The Equal Vote Coalition was first envisioned in 2007 in Eugene, Oregon by Mark Frohnmayer. In 2014 Equal Vote ran a statewide ballot initiative to implement the Unified Primary, a groundbreaking proposal which included a non-partisan primary using Approval Voting and a Top-2 general election. That reform went further than any previous proposals in Oregon, but it didn't go far enough for many and it ultimately fell short of the required signatures to make the ballot. Still, the reform did serve as a catalyst for change and it did spark a new wave of discussion and feedback around voting reform in general.

2014: The campaign hosted an Equal Vote Conference at The University of Oregon with a number of leading election reform groups from around the country represented. At that conference, a conversation between founding members of the groups advocating for three leading voting methods sparked the idea for STAR Voting, which is essentially a hybrid between Score Voting and Instant Runoff Voting.

2017: In 2017 The Eugene chapter launched the STAR Voting for Lane County Campaign. After submitting the required 11,500 verified signatures the initiative was approved for the 2018 November 6th ballot. On November 6th, 2018 the initiative nearly passed with 47.6% of the vote. When we took a closer look at the statistics we found that 12% of voters had left the question blank, likely due to the confusing ballot title and the fact that the initiative was the only thing on the back of the ballot. Only 42% had actually voted no. When we broke the stats down by area the pattern that emerged was that every single precinct where we had campaigned and had lawn signs up had voted yes, and in Eugene, in the areas that we had concentrated our education and outreach, voters had voted yes by over 70%.

2019: Committed to trying again and doing better, in 2018 we launched two new campaigns for STAR Voting for Eugene and Lane County. In Eugene, petitions are only allowed 100 days to collect the required 8,091 verified signatures. We turned in 10,604. After verification we were notified that the petition had failed to qualify by 111 signatures, and that this number was actually extrapolated from only 23 rejected signers based on a 20% sample.

Deciding to appeal the ruling, we requested the Signer's Report, a line by line breakdown of every person who was rejected, and found that the ruling had come down to a handful of people who had been rejected in error, and that 63 people had been subjectively rejected because their signatures did not match the signature on file. Determined that every valid signature should count, we followed up with 25 people whose signatures had been rejected and all of them signed a notarized affidavit stating that they had in fact signed and that the signature on the petition sheet was theirs. We then brought our findings to the Eugene's Mayor Vinis, and to the City Council, who originally overwhelmingly agreed that STAR Voting deserved to be on the 2020 ballot but ultimately failed to take action in time to place STAR Voting on the May 2020 ballot.

2020: The signature analysis and signer affidavits were submitted as evidence in a legal appeal in Jan 27th, 2020, parallel to a direct appeal to the Eugene City Council to rectify the matter. At city council hearing in July 2020 councillors voted 4-4 on a ballot referral for STAR Voting, with some citing a desire to see how the legal appeal went. Mayor Vinis, who had signed the initiative and been supportive of STAR Voting up to that point broke the tie with a No vote.

In the Lane County Circuit Court a hearing on November 10th, 2020 found the case to be "Moot" because the election where the initiative should have been heard had already passed. In the process none of the campaigns findings of voter disenfranchisement were challenged or refuted.

An appeal was filed.

2021:  Additional evidence has been submitted in the legal appeal for STAR Voting for Eugene. In addition to the signatures which were erroneously rejected due to signature mismatch, 255 other voters were marked as "Inactive" and were rejected for this reason.

On April 22nd, 2021, a decision was made by the Lane County Circuit court to "Reactivate" the legal case for the STAR Voting for Eugene ballot initiative. This ruling follows on the heels of a ruling on another case, which had found that it was unlawful to reject the signatures of otherwise registered and valid voters due to their voting status having been listed as "Inactive." It is standard practice to list voters as inactive for a few reasons, such as not having voted in a recent election or having had mail returned as undeliverable. Once a voter is deemed Inactive the elections department will then to stop sending them ballots, and it has been standard practice statewide and at the local level to reject those signers from subsequent ballots initiatives. Clearly, it is voter disenfranchisement to disqualify a voter as Inactive when they are actively trying to participate in the political process by signing an initiative.

The STAR Voting for Eugene legal appeal now has three separate claims as to why it should have qualified for the ballot in addition to the fact that the case is not moot. 1.) The signatures which were rejected in error and which were clearly matched. 2.) The signed affidavits from valid voters affirming that they signed the petition. 3.) The voters who were unfairly disenfranchised and rejected due to having been listed as inactive.
If any of these three claims is upheld STAR Voting for Eugene will be placed on the ballot at the next election with enough advanced notice provided. We hope to see STAR Voting for Eugene on the Eugene 2022 general election ballot.

Tweet
Learn about all the updates and the progression of the STAR Voting campaign in Eugene, OR!
STAR Voting for Eugene
home