Q: Wasted Votes: What's the difference between an exhausted ballot in RCV and a vote of no-preference in STAR?

It all comes down to voter intent. Voter intent should not be corrupted by the system. The system should count your vote and it should be able to make a difference if possible and help you gain representation, but in Ranked Choice Voting that's not necessarily the case. This can often be traced back to the fact that the RCV algorithm doesn't count most of the rankings voters put down on their ballots. Which of your rankings will be counted and which will not depends on the order of elimination. As a result, it may not be safe to vote for your favorite in RCV, just like with traditional Choose-One Voting. Worse, in some cases, voting your conscience can actually backfire, resulting in a worse outcome than if you hadn't voted at all in RCV.

Voters in any system can chose to vote in a way that's not as effective as it could have been, but the STAR Voting system won't waste the vote of a voter who showed up and voted their conscience and your vote will never backfire. It's also next to impossible for an inexperienced voter to accidentally waste their vote in STAR Voting.

There are a number of different ways a vote can be wasted. Let's break it down: 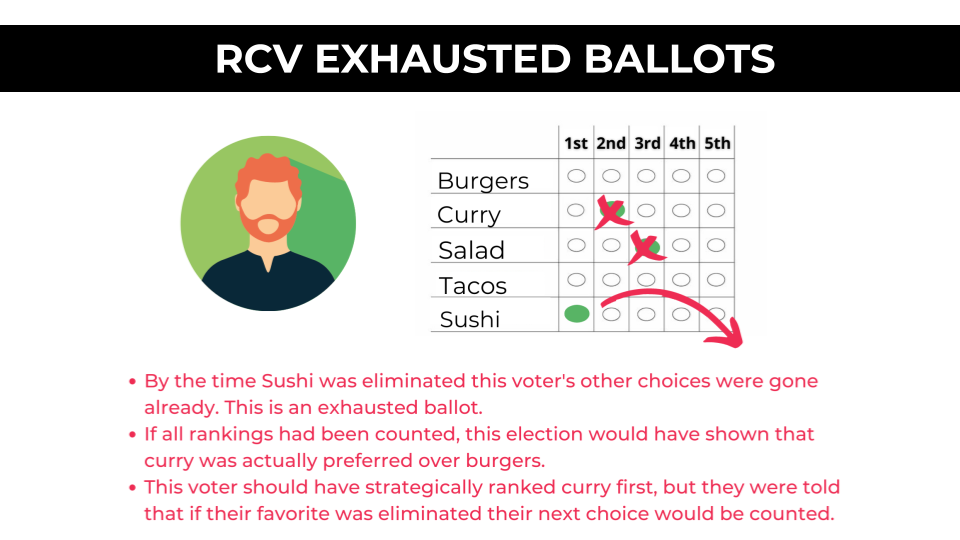 NOTE: For simplicity's sake, we are referring to single-winner elections above, but the same trends in STAR Voting and Ranked Choice Voting hold if we were to talk about Proportional STAR Voting and Single Transferable Vote, the proportional versions of both methods.

NOTE: In this article we are using the common meaning of a "wasted vote" for voters, "Don't waste your vote! Vote for So-And-So." In this sense a vote is wasted if it's unable to make a difference when it otherwise could have, or if the system itself is not counting a vote. Whether or not wasted votes are numerous enough to throw an election and change the winner, wasted votes leave voters feeling powerless, disenfranchised, and they are a leading reason many people cite for not voting at all. In the USA almost 50% of voters don't vote.

The term wasted vote is also used in another sense in discussions about gerrymandering or proportional representation. In that sense, in a given election the term "wasted votes" refers to the number of voters who did not vote for the winner and who may be left feeling unrepresented, even if their vote was counted and did make as much of a difference as it could have.