New York voters went to the polls on June 22nd, 2021 and participated in the largest Ranked Choice election in the nation’s history. Primary voters used Ranked Choice Voting to select the Democratic Party’s candidate for New York City’s mayor. Supporters of this alternative voting method say that Ranked Choice Voting (RCV) will reduce negative campaigning, as well as the spoiler effect, allowing voters to express their true preferences instead of worrying about who will win.

Here is how it works: voters can order their five favorite candidates by preference. 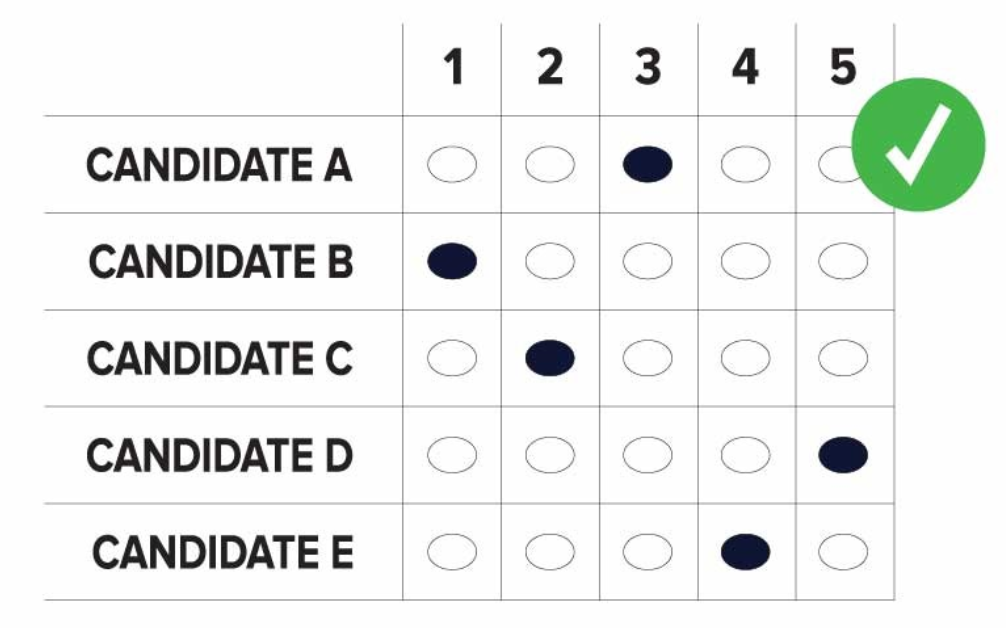 It took two weeks and nine rounds of voting tabulations for Eric Adams to be declared the winner of the primary. The time between the election and July 7th, when Adams was declared the winner was filled with confusion, and uncertainty. On June 29th, the NYC Board of Elections sent the following tweet:

Later, the NYC Board of Elections informed the public that they had not cleared over 130,000 ballot images that were used for testing. Some of the delays and confusion may have occurred under any new voting system, but Ranked Choice Voting is particularly complicated for election officials to administer. Officials need to count ballots in one central location (due to the elimination process) rather than by precinct. Since Ranked Choice voting proceeds in rounds, eliminating the candidate with the fewest votes first, nearly all ballots need to be on hand before the lengthy elimination process can even begin.

Ranked Choice election results are usually displayed in a table like this one from Wikipedia:

Let’s zoom in on a portion of the chart:

The first thing that you may notice is that charts like this are very hard to read. The next thing that might jump out at you is that only first choices are reported. Election officials completely ignore your second, third, fourth, and fifth choices unless your first choice is eliminated.

Here are the first round results in a bar graph: 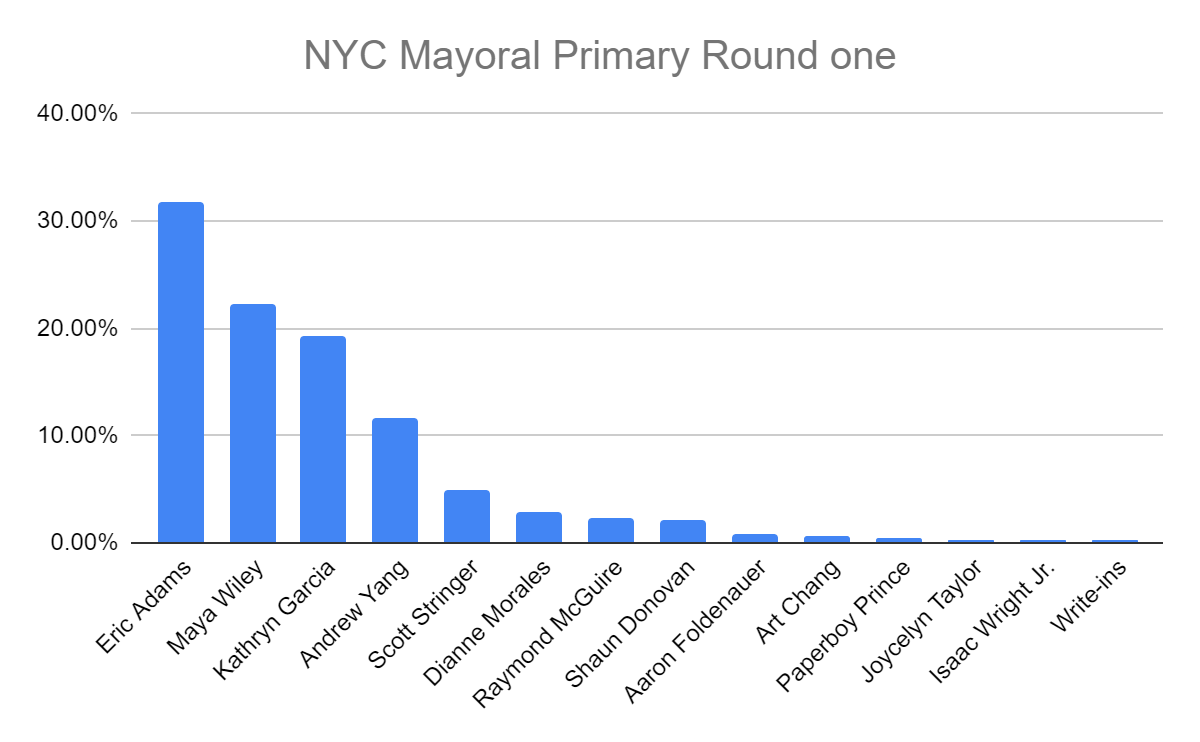 No one candidate received more than 50% of the vote, so the write in candidates are eliminated, and second choices are reassigned: 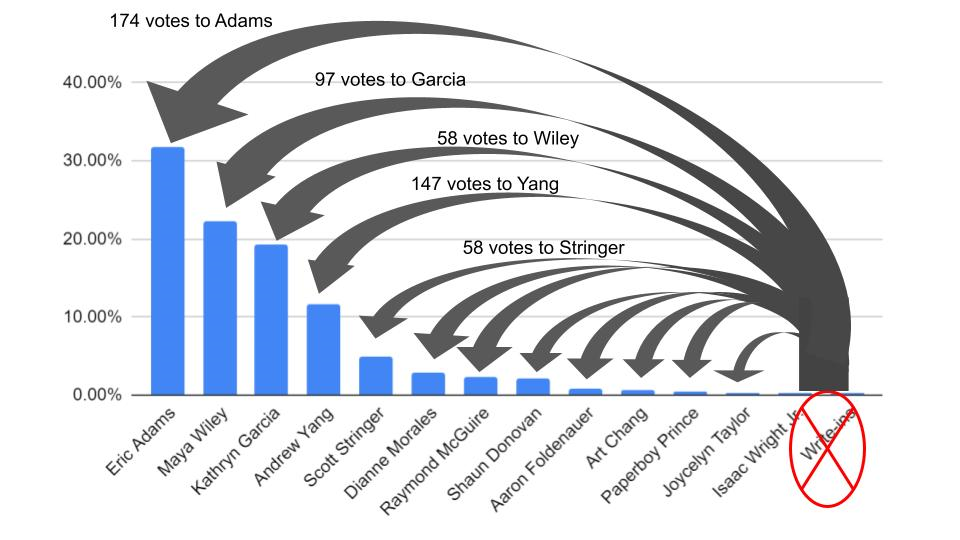 This process is repeated EIGHT MORE TIMES! Until there is a winner.

What happens if all of your choices are eliminated? Your ballot is not counted at all in the final round where the winner is decided. In the New York City Mayoral primary, 117,327 ballots were unable to be counted because all of the preferences that the voters marked had been eliminated. Fourteen percent of voters had their ballots exhausted before the final round, and their votes were not counted in the round that selected the winner. This means that the winner who receives a “majority” will only break 50% of remaining ballots, not total ballots cast. Nearly a sixth of ballots were not counted in the final round.

If a voter accidentally marks two candidates for any rank (two candidates marked as a voter’s first choice for example), their ballot may not be counted either. New York election officials have not disclosed how many ballots were not counted because they were marked incorrectly, but Ranked Choice ballots have historically been marked incorrectly or “spoiled” 4%-8% of the time. Plurality elections (the way we run elections now) result in spoiled ballots 1–3% of the time.

Another potential problem is that the order in which losing candidates are eliminated could have a large effect on the outcome. In the eighth round of counting, Maya Wiley lost to Kathryn Garcia by less than 1000 votes. If Maya Wiley had beat Kathryn Garcia, Garcia’s voters would have had their second choice candidates counted in the next round instead of Wiley’s. More than 200,000 votes would have been re-allocated differently if Maya Wiley had earned a few more votes in the previous seven rounds of relocation. The order in which the least popular candidates were eliminated could have affected how many votes Wiley had in the final round.

The sequence in which minor candidates are eliminated can have a large effect on the final outcome. This video graphically depicts election outcomes under several different voting methods and shows the counterintuitive outcomes that can arise under Ranked Choice Voting.

Were voters able to honestly support their favorite candidates without worrying about wasting their vote on a noncompetitive candidate? There are some circumstances where selecting your favorite candidate first in a Ranked Choice election could help elect your least favorite candidate, here is a simple video explaining how that can happen. The New York Times also published an article that explains how this could happen using the example of the upcoming senate election in Alaska:

“Next year’s Senate election in Alaska, … appears to have three leading candidates. One is Lisa Murkowski, the Republican incumbent who occasionally breaks with her party (such as on Obamacare repeal and Donald Trump’s second impeachment). Another is Kelly Tshibaka, a Trumpist Republican. The third is Al Gross, an independent who would likely be a de facto Senate Democrat. For many Alaska Democratic voters, the order of preference seems obvious: Gross first, Murkowski second — and definitely not Tshibaka. Yet there is a major potential downside to voting that way. If early polls … end up being correct, Murkowski could receive fewer first-place votes than either Gross or Tshibaka. Murkowski would then be eliminated, and her votes would be reallocated. Once the second-choice votes were counted, Tshibaka would easily beat Gross.”

“But if some of Gross’s supporters instead listed Murkowski first, she could receive the second-most first-choice votes and qualify for the final round. In that round, she might beat Tshibaka and win re-election.”

This situation creates a dilemma for Democrats: Should they list Gross first, hoping that the polls are wrong and he can win? Or should they list Murkowski first, trusting the polls and supporting the more moderate Republican? The problem has no perfect answer.”

One study found that 15% of Ranked Choice elections could exhibit this peculiar phenomenon, called nonmonotonicity, where ranking a candidate as your first choice makes it less likely that they win, similar to the example of the upcoming Alaska senate election.

So as a result of using Ranked Choice Voting, New York had to wait two weeks to find out who the Democratic nominee was, 14% of ballots were not counted because all five choices were eliminated (and because voters were not allowed to rank all the candidates) and a higher rate of ballots were likely discarded due to voter errors.

It is not clear that Ranked Choice Voting reduced negative campaigning. Some argue that attack ads were just outsourced to third party groups.

Using the standard “choose one” voting method that we are most familiar with in the U.S. would have created problems as well. Would Eric Adams have been declared the Democratic nominee with only 31.8% of the vote? Under such an outcome, Adams would lack enough support to carry a political mandate. It is possible that RCV performed better than plurality elections even with the delays in reporting results.

Is There a Better Way to Run Elections?

There are many other proposed ways to vote for single-winner offices like mayors, governors and presidents, but one stands out in terms of simplicity for voters, simplicity for election officials and the best outcomes: STAR voting. STAR voting improves upon RCV by using a simple process that counts all preferences that voters express, eliminating the spoiler effect, and simplifying the counting procedure that election officials need to use.

STAR voting is simple: voters can rate each candidate on a scale of 0 to 5 like the sample ballot below shows. 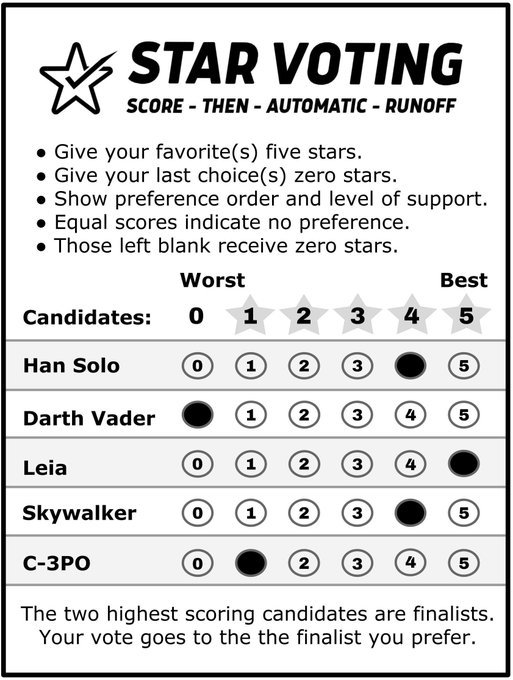 This helpful graphic is from https://www.starvoting.us/star

For voters, this is very similar to how we rate items that we buy on the internet, or how much we like a video on youtube.

STAR is an acronym: Score Then Automatic Runoff. And that’s exactly how it works. Election officials tally up the stars given to each candidate. The two candidates who received the most support advance to the runoff. Your vote goes to the candidate that you gave more stars to.

Below is a sample result from a real-world primary for the Independent Party of Oregon that used STAR voting. It shows how results are tabulated. In this primary election, Kim Thatcher and Ken Smith received the most support so they advanced to the runoff. More voters preferred Thatcher to Smith, so Thatcher won. 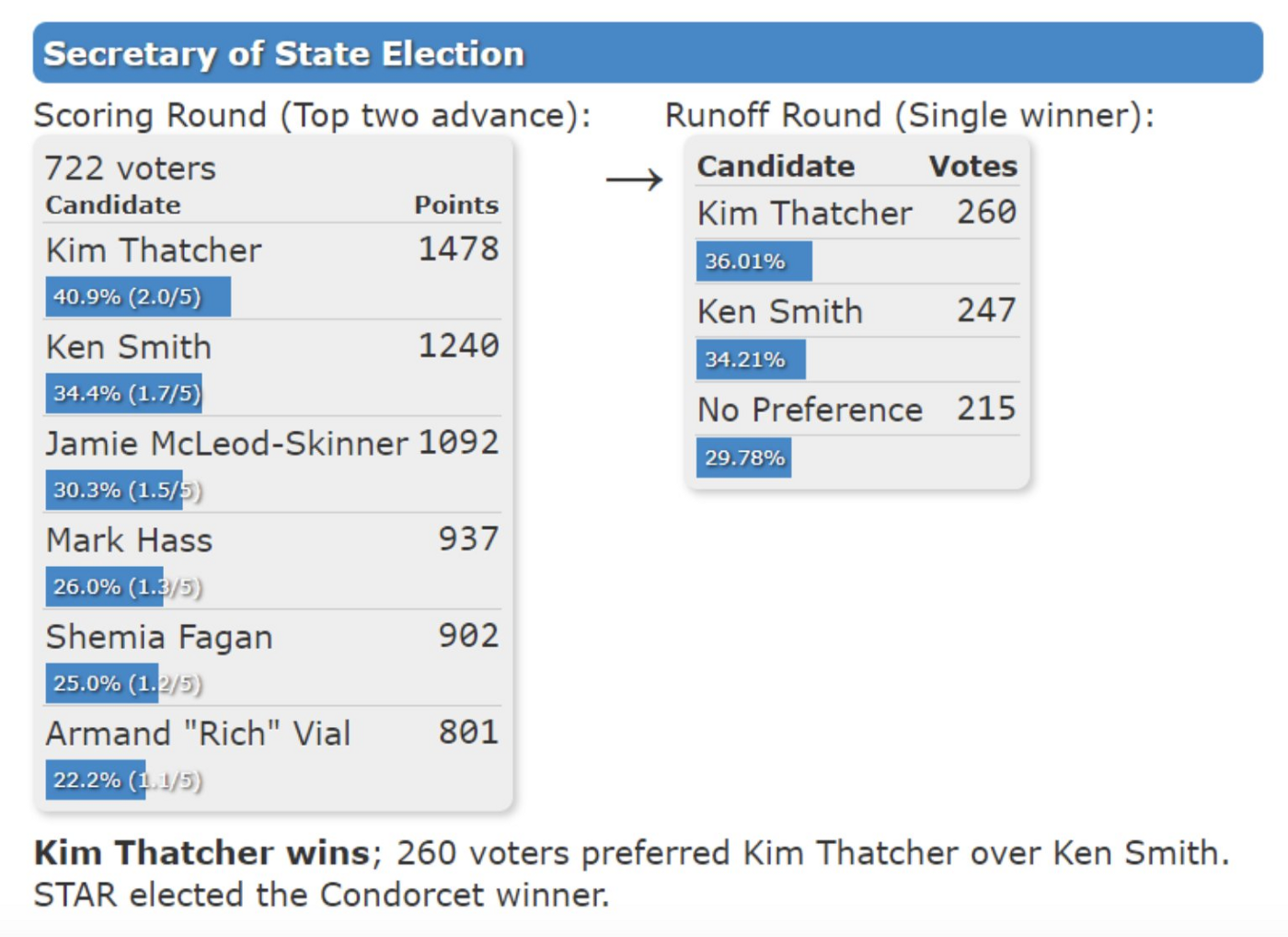 This graphic is from https://www.starvoting.us/star

How Would The Election In NYC Be Different If They Had Used STAR Voting?

The first difference worth noting is that results would have been reported much sooner. STAR voting is simple and tabulation can begin before all the ballots are in. Election officials could safely release results before all the absentee ballots arrived as long as the top two candidates had a larger lead than the absentee ballots could change. With Ranked Choice elections, officials cannot officially eliminate any candidate until all ballots are in, since the candidates with the smallest number of ballots are eliminated first.

Votes can be counted at the precinct level, rather than at some central location. Faster counting of votes would help boost confidence in the election.

As noted above, Ranked Choice elections can still encourage voters to not rank their favorite candidate first. Andrew Prokop of Vox said that :

“If you do want to affect the final outcome, you should try to think about who the race is likely to come down to. Perhaps you dislike both Adams and Yang, but if you would prefer one over the other, it might be smart to rank your [first] preference fifth.”

With STAR voting, voters could freely and honestly express their support for their favorite candidates without worrying about wasting a vote because STAR voting eliminates the spoiler effect, whereas Ranked Choice Voting only mitigates the spoiler effect in some situations. Polling is not precise or reliable enough for voters to try to game the election by under expressing support for candidates that they like the most. If you want to read more about strategic voting in STAR voting check out this resource.

Experts who study voting methods use computer models to compare voting systems, which allows them to test real world scenarios and edge cases with a much larger sample size than would be possible with real election data alone. In these models, STAR voting is shown to be better than other voting methods at selecting winners who represent the voters and markedly more resilient to strategic voting. One model used a metric called “voter satisfaction efficiency” to see how close the winner of elections is to the preferences of the electorate using various different circumstances. A higher voter satisfaction efficiency means the voting method is better at choosing a representative winner.

It is clear that STAR voting does a much better job of selecting a winner who represents the will of the people than any other voting method modeled.

The New York City Mayoral primary showed clearly some of the shortcomings of Ranked Choice Voting. Ranked Choice Voting is complicated so results are reported slowly, voters still have an incentive to vote strategically and in some cases not rank their favorite candidate first, and it is not at all clear that RCV reduced negative campaigning. STAR voting is simpler, and more fair and could work quite well in a large city’s mayoral election.