We want a system where every vote is equal, where we can vote our conscience and where the candidate with the most support actually wins the election!

About us:
Equal Vote North Carolina/STAR Voting NC is a group that was founded to work towards a statewide initiative for voting reform.

Many of us started off as fans of Instant Runoff Voting, the most common form of Ranked Choice Voting (RCV), but as we dug deeper we found that even though IRV is an improvement it has some major pitfalls which can lead to failed elections when there are 3 or more strong candidates. Yes, we were shocked too! This is because in IRV only some voters' 2nd and 3rd choices will actually be taken into account. Not fair and not accurate!

When IRV was the best system out there we were willing to focus on it's advantages over our current, horrible system but after Burlington, Vermont experienced a failed election with IRV in 2009 and then repealed the system the following year, elections experts got to work and created a better alternative.

For this reason we prefer the newer and more representative STAR Voting (aka. Score Then Automatic Runoff Voting). 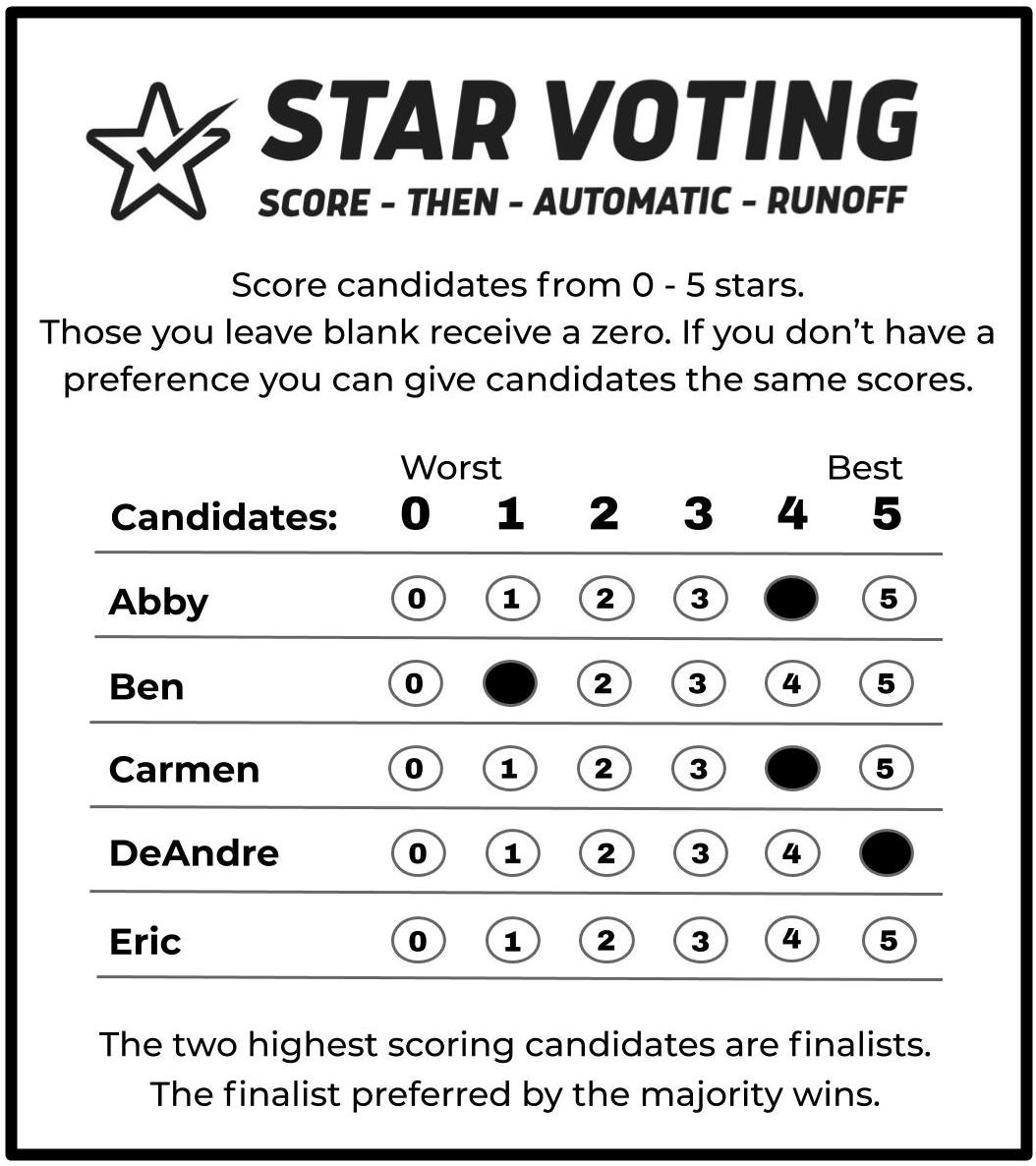 How it works:
With STAR you give each candidate a score from Zero to Five. You vote honestly and then the candidate with the most support wins.

On your ballot you give each candidate a score rating from 0-5 stars. The two highest scoring candidates advance to an instant runoff where the candidate you score higher gets your full vote.
This all happens with one ballot and one election so STAR Voting would increase voter turnout and save a ton of money on elections.

This would also make it cheaper for candidates to run campaigns and help level the playing field for candidates with smaller budgets. Candidates from 3rd parties would benefit as well due to the fact that it's actually safe to vote 3rd party without worrying about wasting your vote or helping to elect you least favorite candidate.


Why STAR?
No system is 100% perfect but STAR Voting is pretty damn close! It would revolutionize elections and democracy! Add in campaign finance reform and the National Popular Vote and we could heal America!

In STAR Voting the best strategy is to honestly vote your conscience. Every vote is equal. The system doesn't favor certain kinds of candidates or voters.

STAR ballots would be simpler to count and much cheaper and simpler to recount than Instant Runoff Voting. For this reason it would be more resilient to election fraud and hacking.